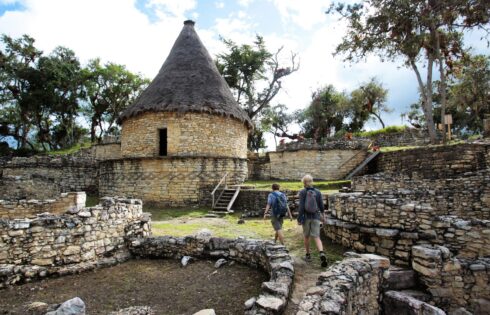 Amazonas region, in the north of Peru, is expected to welcome more than 30,000 visitors as part of the celebrations marking the Raymi Llacta Festival or Chachapoyas Tourism Week, starting June 4.

The region comprises important archaeological vestiges and historical monuments, and hosts a wide variety of animal and plant species.

Its natural landscapes are unique; therefore, the place is a must-visit destination for travelers.

Kuelap Fortress is its main archaeological site —a large stone city built by the Chachapoyas culture.

The site is a big artificial platform heading to the north, settled on the top of calcareous rocks at the summit of Barreta Hill—situated in Luya province 767 km northeast of Lima, at an altitude of 3000 meters above sea level in Amazonas region.

The structure is almost 600 meters long and its walls rise up to 19 meters in height.

The area has seen increased tourist flow since this new system was implemented.

Another interesting tourist attraction is the Gocta Waterfall, 771 meters high with two drops. This is one of the highest waterfalls in the world and its lush vegetation is suitable for long walks in the surroundings.

Situated in Luya province, the funerary site of Karajia is another must-see. It contains over two-meter high sculptures made of clayey stone and dry straw erected on the edge of a cliff. Remains of ancient leaders and important Chachapoyas culture families were found there.

Another popular stop is the Revash mausoleum, located in San Bartolo district. The place is believed to be Chachapoyas burial complex and can be reached either on foot or by horse due to the rough terrain.

Those looking for landscapes with amazing views must visit the Sonche Canyon, which offers a spectacular view of a deep geological fault lying near Chachapoyas (Amazonas’ capital city).

Regarded by many as better than the Colca Canyon, Sonche includes a series of viewpoints to see different waterfalls in the surroundings.

Chachapoyas City also encompasses tourist attractions that beautify the place and contribute to its fame, such as its main square, houses in Colonial and Republican style (called “casonas”), the Yanayacu Well, and the Lagoon of the Condors —situated on its outskirts.