The Moche produced technologically sophisticated ceramics and works in metal; nonetheless, ceramics continue to command most of the attention of specialists and nonspecialists alike.

Generally, Moche ceramics are two-colored: red on cream. These colors exhibit a range of hues, which became darker in the final phases of Moche culture. Moche potters used molds for the bodies of the pots as well as for attachments or seals which they applied to create decorations in relief. The sculptural ceramics are notable for their realism and size and some are inlaid with mother-of-pearl, bone or even small pieces of gold. The pictorial scenes, though only two-dimensional, are complex and were created with fine brush strokes that traced incisions made before painting. The most common shapes are bottles with globular bodies and stirrup spouts; vessels with flaring rims; flaring bowls, also called flower vases; figurines, whistles, etc. The majority of decorated Moche ceramics were intended for ritual funerary uses. 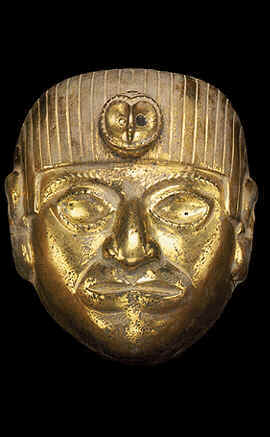 Moche metallurgy was extremely sophisticated. Moche smiths worked primarily with sheet metal which they hammered into three-dimensional shapes. Copper formed the basis of Moche metallurgy, and smiths created gold-copper and silver-copper alloys. They were also familiar with sweat welding as well as repoussé and casting. Lost wax casting was known but not as commonly used as in other parts of the Andes. Smiths also developed bronze. Objects in metal not only had ritual uses, such as headdresses, masks and jewelry, but also served as weapons, agricultural tools and tweezers, etc.

Although few Moche textiles have survived, those that are known are finely woven. Moche weavers were familiar with tapestry, brocade and openwork weaves. Cotton was the most frequently used material, followed by alpaca fiber. Feathers were often used to decorate textiles, especially headdresses and mantles.

Adobes (sun dried mudbrick) were the most commonly used Moche building material. Stone set in mud, however, as well as cane and mud (quincha) were used to construct the homes of poorer people.

Urban settlements are typified by public buildings constructed on platforms, with enclosures decorated by richly-colored murals or friezes, and gabled or shed roofs supported by pillars, pilasters or columns. Windows were set low or high and, in general, doorways had high thresholds. These buildings served either public or private ceremonial functions.

Around and among these buildings stood the residences of the governing elite, built of adobe with plastered walls and carefully finished floors. Many walls had niches. Next to these houses, some of which may have been grouped together to form districts, were the homes of artisans, such as potters and metal workers. We don’t know where administrators and traders had homes, although these types of structures are more evident in the final phase of Moche at the site of Galindo in the Moche valley and at Pampa Grande in Lambayeque.

Without irrigation canals, life in the coastal valleys would have been impossible. In the Lambayeque valley alone, scholars estimate that 35 less land is cultivated today than by ancient Peruvians 1,000 years ago. There are several reasons for this: first, the characteristics of the irrigation canals and depopulation following the European conquest, coupled with accelerated desertification. The variety of field systems indicates that the Moche controlled the quantity of water for their crops. Crops cultivated by the Moche include all those domesticated in the Andes in general, such as maize, squash and beans.

The Moche Culture – Origins and Its Territorial Extent