The Moche Culture – The Geographical Setting

Peru is made up of three vast regions: the coast, the Andes or highlands, and the Amazon forest or lowlands. These regions embrace an amazing diversity of ecosystems defined by factors such as altitude, latitude and sunlight. Intelligent use of this diversity allowed ancient Peruvians to reach high levels of civilization, supported by complex social, economic and political developments.

On the north coast, examples of how ancient peoples took advantage of Peru’s geographical peculiarities are especially evident. There, deeply rooted societies with a marked historical continuity flourished for millennia, in an area that today includes the modern cities of Trujillo, Chiclayo, Lambayeque and Piura, to name the largest ones. Because of their proximity to the Equator one would expect lush vegetation and a tropical climate. But several factors have made the Peruvian coast an extremely arid desert. First, the Andean Cordillera to the east prevents winds and moisture-laden clouds from reaching the coast. Second, the cold waters of the Peruvian or Humboldt current prevent rainfall and cause dense fogs that shroud much of the coast during the winter months –typical phenomenon of the Peruvian coast. 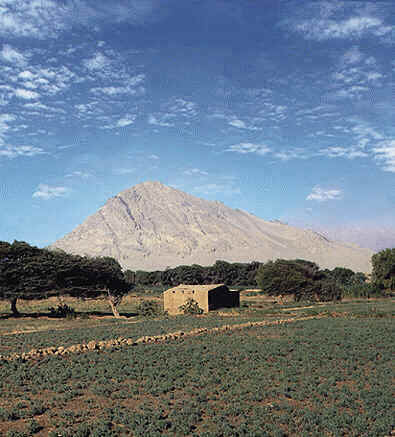 Although rainfall is extremely rare on the coast, periodically a mass of warm Pacific waters moves southward, resulting in torrential rainfall on the Peruvian coast. Because this phenomenon often appears in December, it is called El Niño after the Christ child. Recurring El Niño events have been documented archaeologically as well as historically.

Because of scant rainfall on the coast, the main source of water is the rivers which rise in the Andes to the east and flow westward to the Pacific ocean. These riversslice the  desert, creating oasis-like valleys. These valleys are natural and formed over thousands of years. Ancient Peruvians gave them shape, using irrigation and other native technologies to turn them into rich and productive farmland.

One of these north coast valleys, the Moche or Santa Catalina, served from the first to the eighth centuries after Christ as the seat of the capital of one of Peru’s most thriving coastal societies: the Moche.